The fishing has been a little slow the past week. The weather was a little windy from the south but the sun was out. Jesse and Joe have fished with before. The tide in the Sebastian Inlet was set to start out around 12 p.m. We had no problem finding the pigs. Still no Croakers. While catching bait Jesse also caught a big Bonita and Joe got a mice size Spanish. With plenty of bait we headed for the inlet. Once we got anchored up it was not long before we started getting hits. Jesse landed a couple of nice Reds and Joe caught a nice Snook. Plus a few lost ones. After the bite slowed down we went inside and the big Reds were feeding on the crabs. We already had some crabs and stared fishing.  The Reds kept coming up and missing the crabs. Jesse had one on for a few but lost it. Then after a few more drifts Joe had a taker. Joe did a great job of putting a hook in its lip. Once Joe landed it, the Red was 36lbs. It was a good day of fishing. Glad to see the bite back on. Thanks again Jesse and Joe for fishing with Attitude! 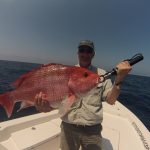